There are two general types of ion exchange resins: those that exchange positive ions, called cation resins, and those that exchange negative ions, called anion resins. A cation is an ion with a positive charge. Common cations include Ca+2, Mg+2, Fe+2, and H+1. An anion is an ion with a negative charge. Common anions include Cl-1, SO4-2, and OH-1. Chemically, both types are similar and belong to a group of compounds called polymers, which are extremely large molecules that are formed by the combination of many molecules of one or two compounds in a repeating structure that produces long chains.

A demineralizer is a vessel, usually with a volume of several cubic feet, that contains the resin. A demineralizer may contain an intimate mixture of both cation and anion resin and is called a mixed bed. With a mixed bed tank, it allows thousands of cation and anion exchange processes to take place as the water passes through the resin. Two-bed demineralizers have two vessels, the first containing cation resin followed by a separate vessel containing anion resin.

Physically, ion exchange resins are formed in the shape of very small beads, called resin beads, with an average diameter of about 0.5 millimeters. Wet resin has the appearance of damp, transparent, amber sand and is insoluble n water, acids, and bases. The ration is normally 2 parts cation resin to 3 parts anion resin.

IFM provides deionized tank systems on a month to month rental basis. Whether you are wanting a temporary system or rental makes more economic sense for your company, IFM can provide the system for your application. IFM rents Strong Base sets, Mixed Beds, D45 and D25, Activated Carbon tanks and PE Softeners at a minimal price.

Many water sources are described as “hard” water, meaning that they have a high concentration of calcium and magnesium carbonates. When these substances are dissolved in water, calcium and magnesium cations (Ca2+ and Mg2+) are released. The resulting concentration of these multivalent cations is the official measurement of water hardness, and may be reduced through the use of ion-exchange resins.

The resin can be recharged by washing it with a solution containing a high concentration of sodium ions (i.e. it has large amounts of common salt (NaCl) dissolved in it). The calcium and magnesium ions detach from the resin’s active sites, being replaced by sodium ions from solution until a new equilibrium is reached.

Hard water can be detrimental to industrial machinery and greatly reduce the lifespan of expensive equipment. Water softeners are widely used in preparing boiler feed water to reduce the amount of scale buildup in the boilers. Cooling towers also utilize softened water in their unit operations, in addition to many cleaning water applications in which scale buildup is not tolerated.

In the process of water purification, Ion-exchange resins are used to remove toxic ions (e.g. copper, lead, or cadmium) from solution, replacing them with more innocuous ions such as sodium and potassium.

Few ion-exchange resins remove chlorine or organic contaminants from water on their own – this is usually achieved with Granular Activated Carbon (GAC). Ion exchange is a reversible process, meaning that industrial resin tanks may be regenerated by thoroughly washing with an excess of desired ions. This greatly decreases the amount of waste that must be discarded, which not only cuts down on costs, but is highly sought after in today’s growing environmental consciousness.

Water of the highest purity is required for electronics, scientific experiments, production of superconductors, and nuclear industry, among others. Such water is produced using ion-exchange processes or combinations of membrane and ion-exchange methods. Cations are replaced with hydrogen ions using cation-exchange resins; anions are replaced with hydroxyl ions using anion-exchange resins. The hydrogen ions and hydroxyls recombine in the production of water molecules. Thus, no ions remain in the purified water. The purification process is usually performed in several steps with “mixed bed ion-exchange columns” at the end of the technological chain. 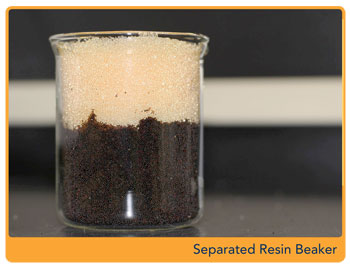 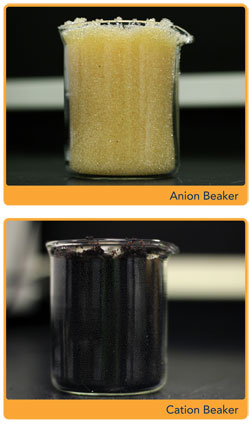 Feel free to contact us for more information about our services and products.